The Noble County Community Foundation recently awarded scholarships to area college students including Allison Thomas of LaOtto. Thomas was selected as the recipient of the Talia Joy Smith “Performing Arts” Scholarship. The applicant selected for the scholarship must write an essay explaining how and why they will be able to deal with and persevere through the inevitable challenges faced in a career in the performing arts. When accepting the award, Allison stated “I too have a passion for inspiring others through performing arts. Talia was someone I looked up to.” Allison is also the 2012 Founding president of the IPFW Show Choir Organization Program.

Talia was only 20 years old when her life was tragically taken when hit by a car while riding her bike on the beautiful summer day of August 18, 2010. The scholarship was established to carry on the legacy of Talia, who unfortunately will never fulfill her own lifetime dream as

a Broadway performer. Talia graduated from East noble High School in 2008 with honors as one of the top 10 in her class. She was a junior at New York University, majoring in Musical Theatre and Vocal Performance at Steinhardt School of Culture and Education. Each summer after graduation, Talia gave back to the community by working as Musical Director of the Gaslight children’s Theatre Workshop; the program that nurtured Talia’s love for Theatre.

Pictured are Talia’s parents, Brad and Mary Smith of LaOtto, who established the scholarship in her memory, and Thomas.

Other college scholarships were awarded to area Noble County students. Sydney Byerley of Kendallville was awarded the Paul Glass Memorial Scholarship. This scholarship is awarded to a recipient who is pursuing a career in an agriculture related field. Byerley also received the Oliver and Eleanor

Ellenbecker Previous Award Winner Scholarship which is awarded to a student who previously won a scholarship administered by the community foundation. She is studying Animal Science at Purdue University.

Carrie Scheiber of Kendallville was another recipient of the Oliver and Eleanor Ellenbecker Previous Award Winner Scholarship. She was also the winner of the Nathan Shumaker Memorial Scholarship which is for a student from Noble

County in the second or subsequent year of post-high-school education who received some or all of K-12 schooling through home school or a Christian school.

Shumaker of Kendallville was just 16 years old when he was killed in an automobile crash in 2005. He was a sophomore at East Noble High School at the time of his death and was involved in the East Noble Car Team.

Scholarships offered through the Noble County Community Foundation will be available at the community foundation’s website www.noblecountycf.org November 16, 2012.

Pictured is a portion of the books purchased with a recent grant from the Ruth N. Fitzpa 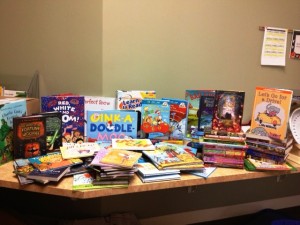 trick Memorial Fund that was established at the Noble County Community Foundation by Ruth’s daughter and son-in-law, Kelli S. and G. Steven Burrill. The fund was established in 2008 to provide support to the Kendallville Public Library to purchase materials for the children’s collection. The library was able to fill holes in series, purchase new series and fulfill an amazing number of patron requests for specific books.