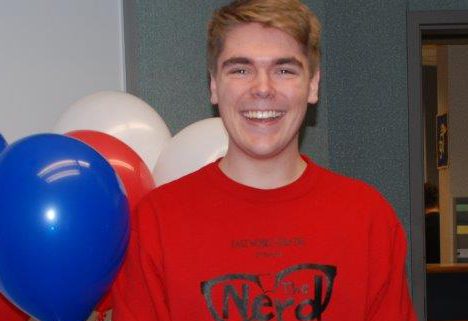 Lucas Graden of East Noble was selected to receive full tuition to the Indiana college of his choice and a $900 yearly stipend for required books and equipment.  Lucas is the son of Kelly and Bradley Graden of Kendallville.

Upon the surprise announcement Lucas stated, “Gee, I haven’t been called down to the Principal’s office since elementary school. This is unbelievable – high school is almost over and what a dream to actually achieve this.”

Parents Kelly and Bradley said, “We are very proud of Lucas and all of his achievements – we are truly blessed.”

To be eligible for the scholarship students must reside in Noble County and attend an accredited high school, and achieve a high school grade point average of at least 3.5 on a 4.0 scale.  Students need to be well-rounded seniors through their community service, volunteerism and extracurricular activities and work experience as well as leadership roles.

This year’s applicants were initially scored for performance, community service and volunteerism, extracurricular activities and work experience, as well as leadership roles.

This year’s 58 Lilly applicants also provided recommendation letters from three references and submitted three essays, which were evaluated by a community foundation committee of six Noble County citizens, who interviewed the top 10 finalists.  Those finalists not offered the Lilly Endowment Community Scholarship will receive a $1,000 scholarship from the Noble County Community Foundation, Inc.

Names of the top candidate and two alternatives were then submitted for final selection approval to Independent Colleges of Indiana, Inc. (ICI) for the selection of the recipients.

ICI is a nonprofit corporation that represents 31 regionally accredited degree granting, nonprofit, private colleges and universities in the state.

The scholarships are the result of a statewide Lilly Endowment initiative to help Hoosier students reach higher levels of education.  Indiana ranks among the lowest states in the percentage of residents over the age of 25 with a bachelor’s degree.  There were 142 scholarships awarded statewide.