The Julia L. Atz Scholarship will award $2,500 in 2021 to a senior (or entering their senior year in the fall 2022) in college or a post-graduate student pursuing a career in classical music performance or conducting, and with a college GPA of 3.00 or above. An applicant can re-apply and receive financial support in ensuing or subsequent years. Preference will be given to applicants from Indiana. Deadline to apply is Friday, April 29, 2022, at 4pm.

This scholarship was created by the late Julia L. and her late husband, John Atz. The family continues to honor the legacy of music enthusiast Julia’s passion for music and the arts. We are pleased to assist in fulfilling her desire to share her passion for music.

This will be the fourteenth year the scholarship will be awarded to a college or a post-graduate student pursuing a career in classical music performance or conducting. 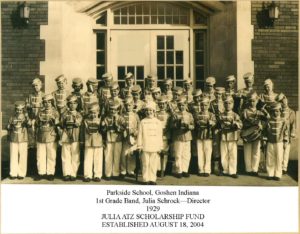 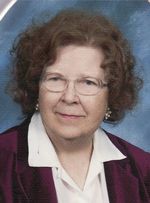 The Julia Atz Scholarship was started by John Atz in memory of his wife Julia. Julia was born into a musical family on September 23, 1923 in Goshen, Indiana. Her parents were Orlin and Eva Shrock and her brother’s name was also Orlin. When she was in the first grade, she was the drum major of the band. She played the piano, organ, and flute, and was also a talented alto singer. In 1941 she graduated from Goshen High School and she started her undergraduate program at Northwestern University but had to finish at Goshen College with a degree in Elementary Music Education, because her mother contracted cancer.

In 1947, she married her high school sweetheart John, moved to Kendallville, Indiana, and went on to have three children—Debbie Fagas, Catherine (Fred) Kreigh, and Joseph (Theresa) Atz. Her children used to perform as a trio at Eastern Star events because Julia was involved in this group. Being proficient on the piano, Julia made sure that all of her children took piano lessons when they were growing up. Since their childhood, voice lessons and learning to play other instruments have been included in their repertoire. Music has also been passed down to Julia’s grandchildren—Jenna Atz and Dustin, Scott and Samuel Kreigh.

Julia’s husband owned and ran the Atz Furniture Store in Ligonier, Indiana.  He was involved in both the Ligonier and Kendallville communities. Some of his community involvement included being a member of both the Rotary Club and the Kendallville Masonic Lodge F&AM. He was on the Economic Development Steering Committee and was a member of the Noble County Fair Board. He helped with the Apple Festival and enjoyed driving his yellow convertible in community parades. His business also belonged to the Chamber of Commerce.

Julia was a true lady. She taught her daughters to be ladies and her son to be a gentleman. She got really excited when someone else talked about music and shared her same passion. Her goal was to be a good mother and raise a family, so she stayed at home while her children were young and substitute taught occasionally during that season of her life. Another goal she had in life was to be a good organist.

She loved dancing, including square dancing with friends and she also enjoyed the Arts. She was very passionate about music and in general was an enthusiastic lady. Classical music was one of her favorite styles of music, but she enjoyed many other styles as well. She was tenacious, perseverant, and a hard worker. One of her favorite Bible verses was Psalm 121:1 which reads:

“I will lift up mine eyes unto the hills, from whence cometh my help.”

Julia was a very social person, so getting involved in the community was something that came very natural to her. She was active in Eastern Star, Sigma Ata Musical Sorority, and was an active member, choir director, and organist at Trinity United Methodist Church. She was also the founder of the Noble County Concert Series and was president of the group for over 20 years.

Julia wanted to keep music alive for future generations. She wanted to keep it immediate; keep it personal; listen to as much live music as a person could; and go out and find music.