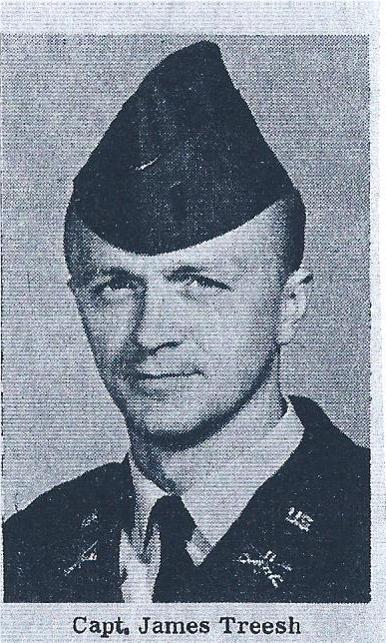 Jim Treesh was born on June 9th, 1940 at his grandparent’s farm in Lagrange County. He was raised in Kendallville, Indiana and later moved to Cree Lake. Jim was a very kind, funny, smart, and athletic young man. In his younger days Jim attended Lake James Bible Camp.
Bill Rollins, Jim’s cousin and good friend, remembers good memories with Jim. They both graduated from Kendallville High School in 1958 and played on the football team together.
In an interview, Bill said, “He was a hard worker and dedicated. He ran track and cross country and football and was very serious. He was just a nice individual. He didn’t have a temper, but got along with everyone. He was athletic and worked out. He would do whatever he could for you to help you out.”
Karen (Susie) Treesh-Knepper, Jim’s sister, shared some of her favorite memories of her brother. “I remember him playing soldier on our grandparent’s farm with a wooden gun and a pan on his head as a helmet when he was about 6 or 8. He was always taking a toy airplane or making a paper one and making humming noises as he would have it “fly’ about his head. He would draw pictures of tanks, airplanes, and soldiers, so I think he was destined to become a soldier in later years. Jim loved to run and he ran every day in Germany. They called him the American Snowman as he ran in a white jogging suit. He loved our grandmother’s cherry pie and she made him one every time she saw him until she got too old to bake anymore. (She lived to be 100 years old.).”
Jim attended Orlando Junior College for the first two years and then transferred to Indiana Central in Indianapolis where he graduated. He became a teacher in Nashville, Indiana until he enlisted in the Vietnamese War after President Kennedy was shot. He attended the Officers Candidate School (OCS) at Fort Benning, Georgia. Jim got stationed in Germany and Korea when he volunteered to go to Vietnam so that he could then be posted stateside and eventually get married and raise a family. He studied the Vietnamese language in Monterey, California and was an advisor.
Bill said, “I remember when we had our last get together. We were at my mother’s house. Jim got his papers and didn’t want to talk about it. He knew he was going to a dangerous place.”
Jim was killed in Vietnam on May 3rd, 1970 and was only 29 years old.
One of Jim’s favorite Bible verses was John 3:16— “For God so loved the world that he gave his one and only Son, that whoever believes in him shall not perish but have eternal life.”
Bill decided to start a scholarship fund at the Noble County Community Foundation as a way to honor Jim and his parents, Paul and Louise. Bill said, “It seemed like a nice thing to do to honor Jim because of the fact that we lost him so young.”
Susie said, “Jim would have made a significant contribution to society had he lived. He was a wonderful son, brother, uncle, teacher, and fellow human being.”
This scholarship is one way that Jim’s legacy can live on. He sacrificed and contributed his life for the freedom of Americans. He was a true hero!

Business and Trades Scholarship in honor of “Brenton” and Roberta...