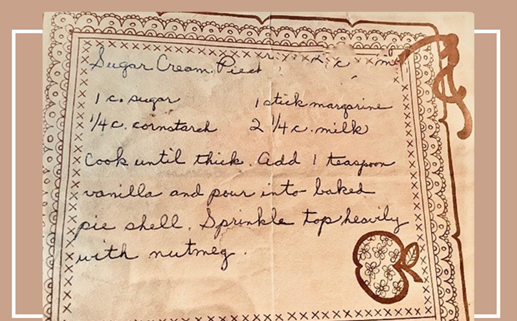 Math geeks and donors unite because March 14th is National Pi (π) Day. Of course, we like to celebrate it as National Pie Day 🥧 because it reminds us that GIVING IS AS EASY AS PIE.

Mathematically, Pi (π) is the ratio of a circle’s circumference to its diameter. Does knowing that make us sound seriously smart or notably nerdy? Wait, don’t answer that!

A better question might be, “Who is super generous and understands that if everyone in Noble County gave just 5% of their estate to the Foundation in the next 10 years that this could result is $29.3M in donations”? That’s you! I think we can all agree that 5% is not a lot. In fact, 5% of an Old-Fashioned Indiana Sugar Cream Pie leaves plenty for you to enjoy yourself and more than enough to share with others.

Speaking of sharing, we hope you’ll enjoy this delicious Hoosier Classic Sugar Cream Pie recipe as a reminder that together we can cook up a recipe for a greater tomorrow. Think about it, if everyone planned now to make a 5% estate gift to the Foundation later, that would increase the grantmaking to our county by over $1M annually.

Additionally, we conferred with those math geeks who celebrate the actual Pi (π) Day and they did some calculations for us. They said if we keep up this 5% giving trend for the next 50 years, we could raise $104M in donations. That could build a healthy county, create a downtown historic district, increase educational attainment, create a skilled workforce, or break the cycle of poverty! Like a good recipe, when it’s all combined, it really adds up.

GIVING REALLY IS AS EASY AS PIE,

While there is no one set origin of
Hoosier Sugar Cream Pie, the dish is
said to have been popularized by the Amish and Shaker communities in
Indiana during the 19th century when
they were running low on supplies.

It was known as “Desperation Pie” because its ingredients could be found
in almost any pantry, making it easy to make at any time throughout the year.

The Shakers believed in eating hearty
and healthy food. They must have had
a sweet tooth, though, judging by
sugar cream pie.

In 2009, the Indiana General Assembly officially elevated the status of this humble dessert—that’s when Sugar
Cream Pie was named the official
Indiana state pie.

You Are A GEM!

April – Give It Twice
Scroll to top